Tackling the gender imbalance in STEM 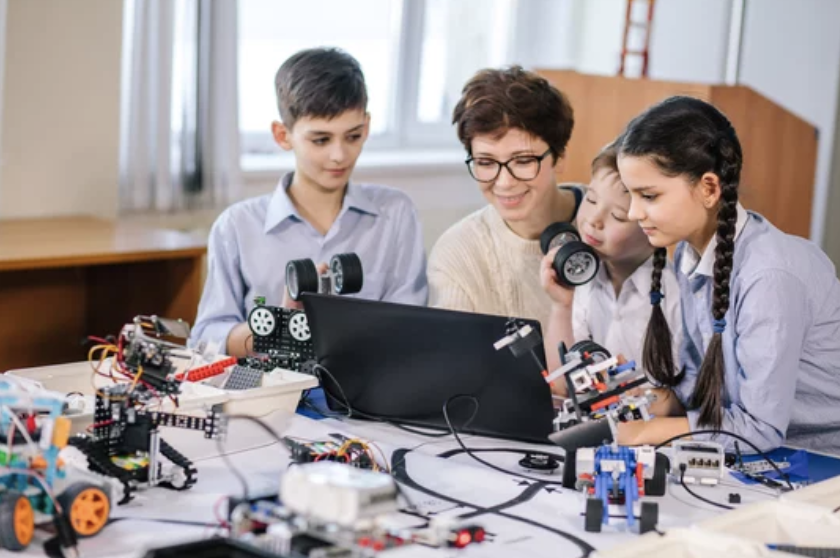 In England, there is an evident gender imbalance in STEM. The situation isn’t particularly good for technology subjects, with both computer science and design and technology sitting in the list of least popular subjects with girls, and computer science topping that list at A-Level (post 16 education), although, the numbers of girls choosing to study these subjects has increased by a small amount year on year.

Alongside working for Cypher Coders as a ‘Researcher, Certification Manager and Teacher’, I am studying for my part-time PhD in Education at the University of Cambridge focusing my research on the role that gender plays in post-compulsory Technology education in secondary schools (children aged 14-18 years in England). I’m fascinated about the gender imbalance in Computer Science subjects in schools and Universities or Colleges.

Now, before I start, I should mention that when I talk about gender(s) I am referring to how the child chooses to present themselves to the outside world, this may, or may not, be the same as their biological sex. Certainly, while some psychologists are firm in their opinion that male and female brains are biologically hardwired differently, there are many more who believe that we are socialised to be different, and our male and female brains are all essentially the same until they are taught not to be by our cultural and societal norms. However, while a fascinating topic in and of itself, the nature vs nurture debate of gender is not the primary focus of my blog. Instead, my focus is on the gender imbalance in computer science subjects in education.

Of course, we cannot ever confirm why there is an imbalance of girls interested in technology subjects, but there are a few theories out there that I will present.

Theory 1: Male brains are moulded to be better at systemising tasks

The first, is that male brains are moulded (either by society or biology), to be better at systemising tasks, of which computer programming certainly sits within. Systemising is the ability to analyse or construct systems and order, it follows rules, logic and often works in binary, with little room for grey areas or interpretation. Indeed, subjects where systemising ability is paramount (maths, computer science, physics, engineering) tend to experience much higher numbers of boys electing to study the subject than girls.

Likewise, another theory is that girls perceive technology subjects to be more difficult than boys perceive them to be, and so they are put off studying these subjects beyond the compulsory years for fear of not getting top grades. Although, according to the WISE group, the percentage of girls awarded an A or A* in their technology A-Level (design and technology or computer science) is higher than the percentage of boys who received an A or A*. Thus, it would seem that while the perception may be prevalent, the reality is that girls are more likely, for whatever reasons, to get a top grade than boys. Indeed, this is true across all subjects in the achievements of different genders, and girls appear to be consistently outperforming boys in their exam results across the board. However, up until recently, boys tended to  achieve higher than girls in maths, further maths and chemistry.

Theory 3: Interest in tech subjects is influenced by the environment

Other suggestions are that the environments themselves, such as the physical classrooms and workshops, are somewhat hostile to girls, especially with design and technology classrooms, often filled with heavy engineering machinery and tools. Thus, while girls are said to find these workshops hostile, boys enjoy using and experimenting with the equipment and are perhaps more likely to study the subject as a result. Certainly, while this may be the case, it has also been found that boys are more likely to have access to a set of their own tools at home, and they are more likely to be familiar with gaming, meaning they may already have familiarity with coding and tools and are, perhaps, more likely to study the subject beyond the compulsory years.

Relatedly, this is also linked to the idea that subliminal messaging from society, culture and other people may influence how a child perceives a certain subject, with the idea that girls are good at the arts and humanities, while boys are better at the sciences. Interestingly, these social stereotypes tend to affect boys more strongly than girls, with girls reporting that they are more comfortable to break social barriers to study computing or engineering, while boys are less likely to study textiles and fashion design because of social barriers. Certainly, this could be down to the numerous campaigns that encourage girls to get into STEM, which seem to be doing their job very well, while the counter campaign that encourages boys into the arts and humanities does not exist. It is worth exploring that maybe one of the reasons STEM subjects are male dominated is because males do not feel comfortable studying subjects outside of this field.

This is where Cypher plays a really important part in neutralising computer science. We have created a ‘coding for all’ program, and this is really key to encouraging an inclusive field, inasmuch as gender isn’t relevant in our classrooms, camps, clubs or virtual environments because we want all genders to enjoy and thrive with us.

Our themed camps, which run during weekends and school holidays, focus on a specific topic and all the activities within the camp also revolve around this area, like Magic or Entrepreneurship. Ensuring our themes are inclusive, relevant and something that children from all backgrounds and abilities can enjoy is absolutely paramount to what we do, and its effectiveness is evident when we examine our 50:50 learner gender split. We hope that by coding with us, everyone will see how important computer science is for the future, and will consider taking it for GCSE, A-Level or at University or College level.